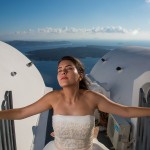 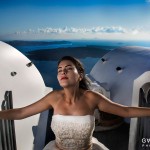 The reason I dint touch this image from the beginning was the ugly air condition on the back of the bride, recently after serious thinking  I decide to remove it  , was tough because after removing it a very small  space left for clone stamping,  however they area was covered by a hard shadow  which help me lot.

First I crop the image by the rule of thirds, that give me a nice 1/3 horizon above the bride, the air condition was next, after carefully selecting they area around it,  I pick  a small clone stamp brush and  paint all over it and  slowly  start disappearing.

Next I make the bride a bit more sexy with the magical liquify Photoshop tool , the Liquify Tool is one of the most powerful image editing tools in Photoshop. It will allow you to “push and pull” pixels any way you’d like. It is a common misconception that the Liquify Tool is only used for making people thin.

Continue with some basic color corrections and with a fine brush, I dodge and burn the entire image, dodging and burning are terms used in photography for a technique used during the printing process to manipulate the exposure of a selected area(s) on a photographic print, deviating from the rest of the image’s exposure.

Finally I remove five more ugly details from the original image, so I challenge you here to practice by spotting the differences between the two images.